"Bloody Omaha" at A Bridge To Lard

Labels: bloody omaha, d-day, IABSM, too fat lardies, WW2
Apologies for the rather terse placeholder last night - got out of the curry house with Lard Assembled to realise there was no way I was going to make it home by midnight, hence the very short phone blog post!

That aside: rewinding to the morning...

Tim made it up from the far side of Cambridge by just before 7am, to find the car packed and me putting the finishing touches to lunch. We hit the road about 7:05 and (after a slight mix up finding the venue) arrived at the Wyvern Wargamers in deepest darkest tractor-land at about 9:20.

Since the playtest, I've added another complete box of FoW 29th Infantry, making 330+ US figures in all, up against a paltry 50 Germans (6 MG teams, 4 Mortars, 2 big men). This is still short of the total - if wave 3 ever makes it to shore, I need to have killed about half the Americans to furnish enough figures for wave 3 (Rich's estimate of 'only a company' relies on the fact that their figures are individually based, rather than in 4s, FoW style!), but as it turned out, worked out fine. Someday, I may shell out on another 29th box and two boat sections to make it up to the full 500 minis: at which point, I think I'd GM the Germans even more aggressively. :D

I also shelled out on some small PostIts to label the bases - not ideal in respect of being somewhat garish, but the colour coding did help! In an ideal world (again) I'd letter the back edges of bases, but at least this way I can reuse figures.

The one thing I didn't get time to do is build a pile of casualty bases - before this game goes to a show, I'd like the ability to remove bases and actually replace them with casualty bases, as I think it would increase the impact of what's already quite a gripping game. I'd also toy with rebuilding the beach boards, but that's a long term plan :D

Players for the morning were Neil, John, Dave and Jamie, who got stuck in with a will, despite the weather conditions in the Channel meaning the first wave only landed a couple of LCVPs to start with. Wave one was, in fact, so delayed that the last LVCP arrived after the first of wave 2!

The '88 down the beach on WN61 opened up good and early, took out one of the DD Shermans, and scared the hell out of a second (not often you see a Sherman survive a direct hit from a Pak43... it didn't survive the followup, though). Unfortunately for the Germans, just after that the US naval bombardment finally took out the '88.

Meanwhile, the infantry pushed up the beach to the shingle, taking a fairly hefty hammer from the German machine guns as they did so. The German FOO managed to get through to his battery and call down some pre-registered fire on one of the gaps in the beach obstacles. One of the surviving DDs got a direct hit on one of the WN62 bunkers, taking out one of the two Czech 75mms that overlooked the beach.

By (real world) lunchtime, a couple of engineering teams had made it up off the beach, and blown a sizeable gap in the wire using Bangalore torpedoes, with a decent sized group of assorted infantry from several sections in support. Ten LCVP had made it onto the beach, all but three intact - one taking a near direct hit that pretty much wiped out its passengers barring a couple of small sections.

The after lunch team was slightly more intimidating to umpire, containing as it did Rob "Blenneville or Bust" Avery, and Nick Skinner of TFL, as well as Noddy and Chris (I think - sorry if I missed who ended up playing, guys)... so no pressure, then, with the most prolific IABSM scenario author and one of the game's co-authors playing!

A ragtag mix of troops from several different boat sections began to push its way inland through the marsh, aided by several more gaps being blown in the wire and me making the schoolboy error of going for calling for a new aiming point for the artillery (with the attendant issue of getting the bloody battery commander to work with a new set of coordinates), rather than having the FOO 'walk' the fire towards the very tempting targets. 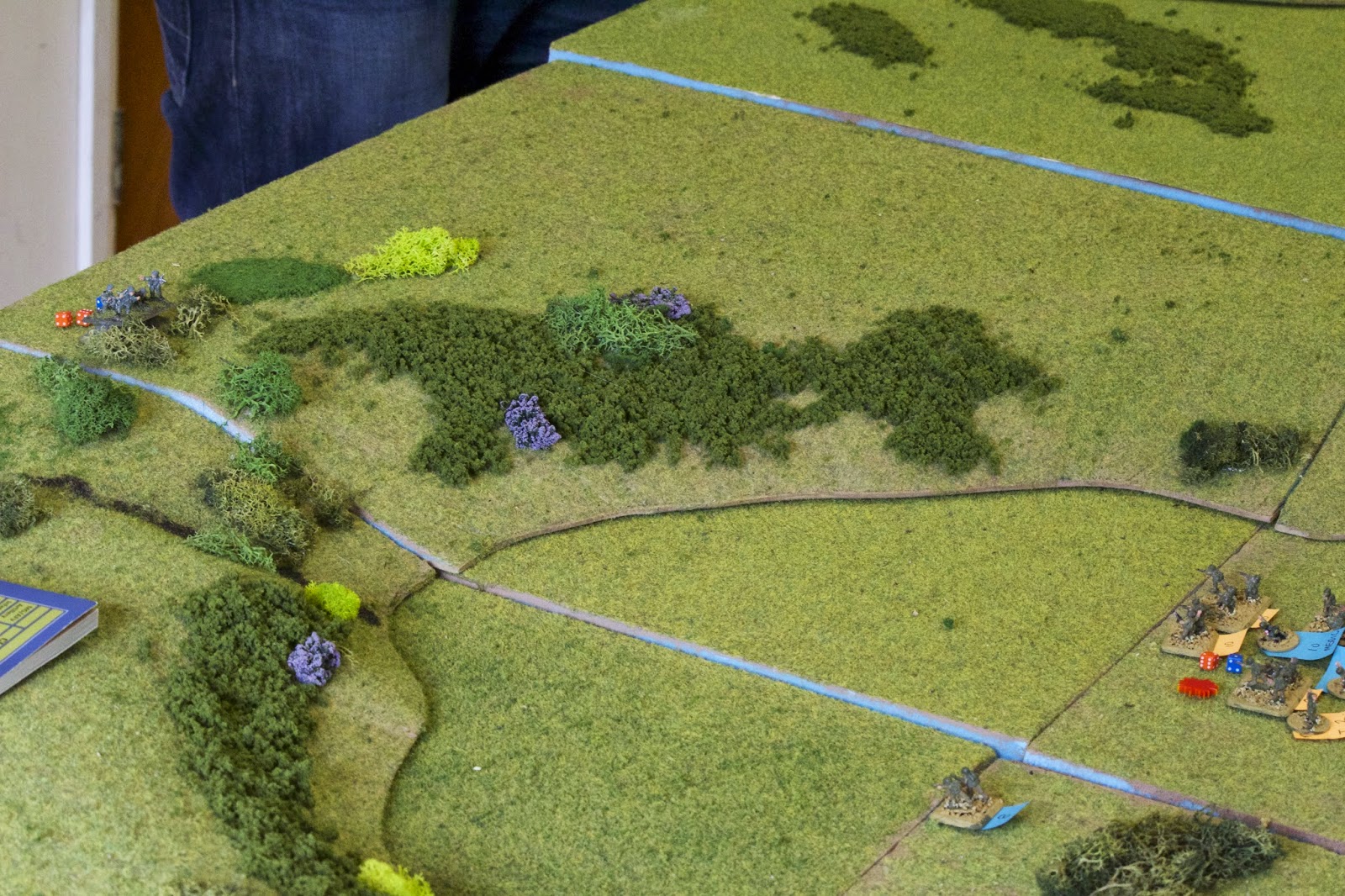 That same damn Sherman (due to get 'Killer' graffitied on its turret, methinks) took out the second 75mm bunker, and some concentrated fire from several BAR teams and infantry sections, as well as a coax MG from another DD, took out the MG that had being doing the most damage in front of WN62 (the Beast of Omaha), and began working through the triple layers of wire protecting the German standpoint.

About this point, the lead section worked its way inland to the bottom of a U-shaped valley that wasn't visible from WN62 or WN64. Sadly, it was visible from the small bunker at the head of the valley, in which another MG42 team was lurking - the US got caught in the open, and absolutely hammered. 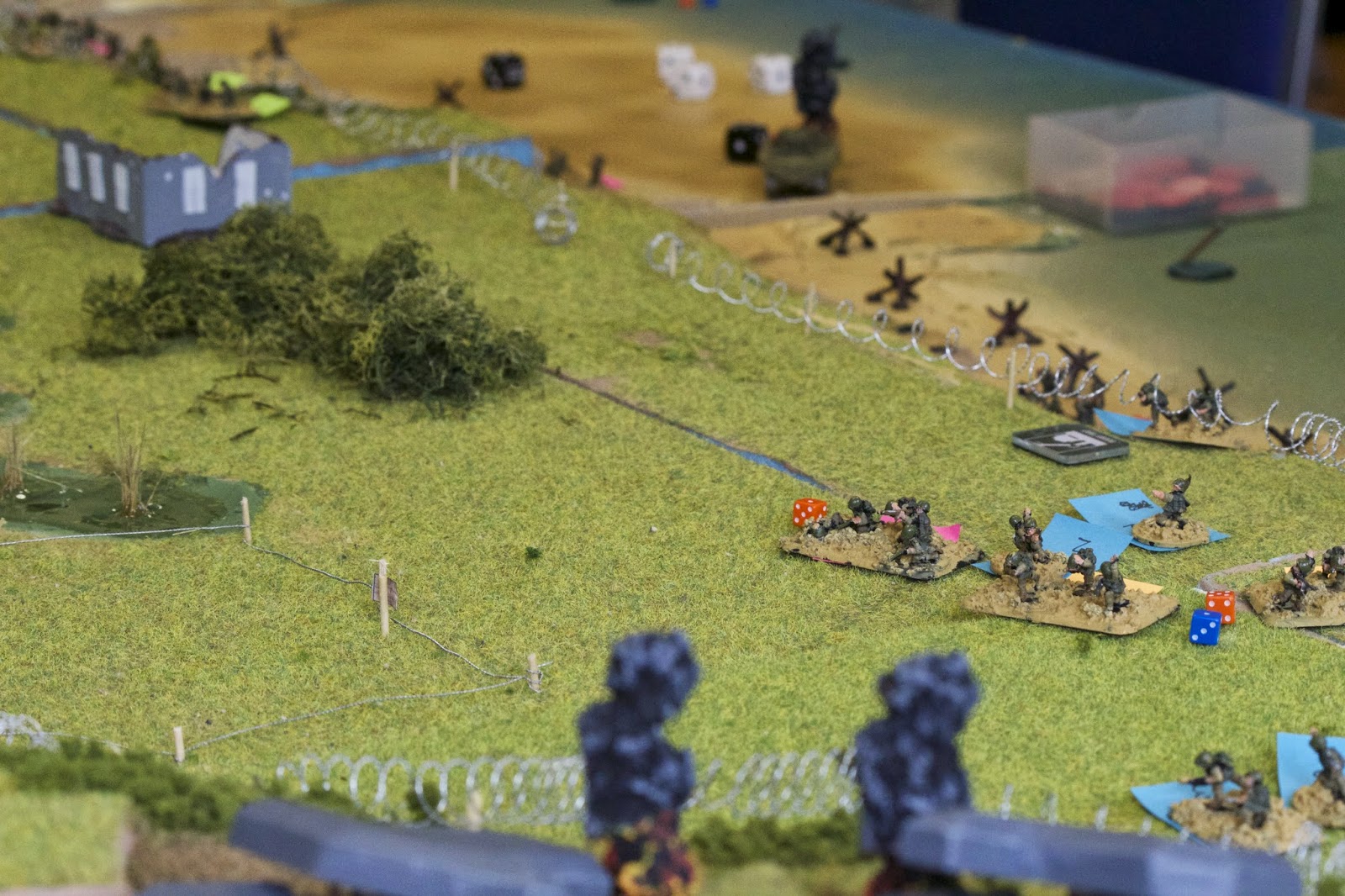 Revenge was fairly swift, however, as everything that could draw a bead on that bunker now did so... as it was a 'poor' shot due to being well dug in, it did survive for quite a while.

Meanwhile, Rob's infantry, with several flamethrowers, was making for WN62, whose useful defences were down to one MG42 that could hit him (the other two were concentrating on the buildup of troops crossing the marsh). 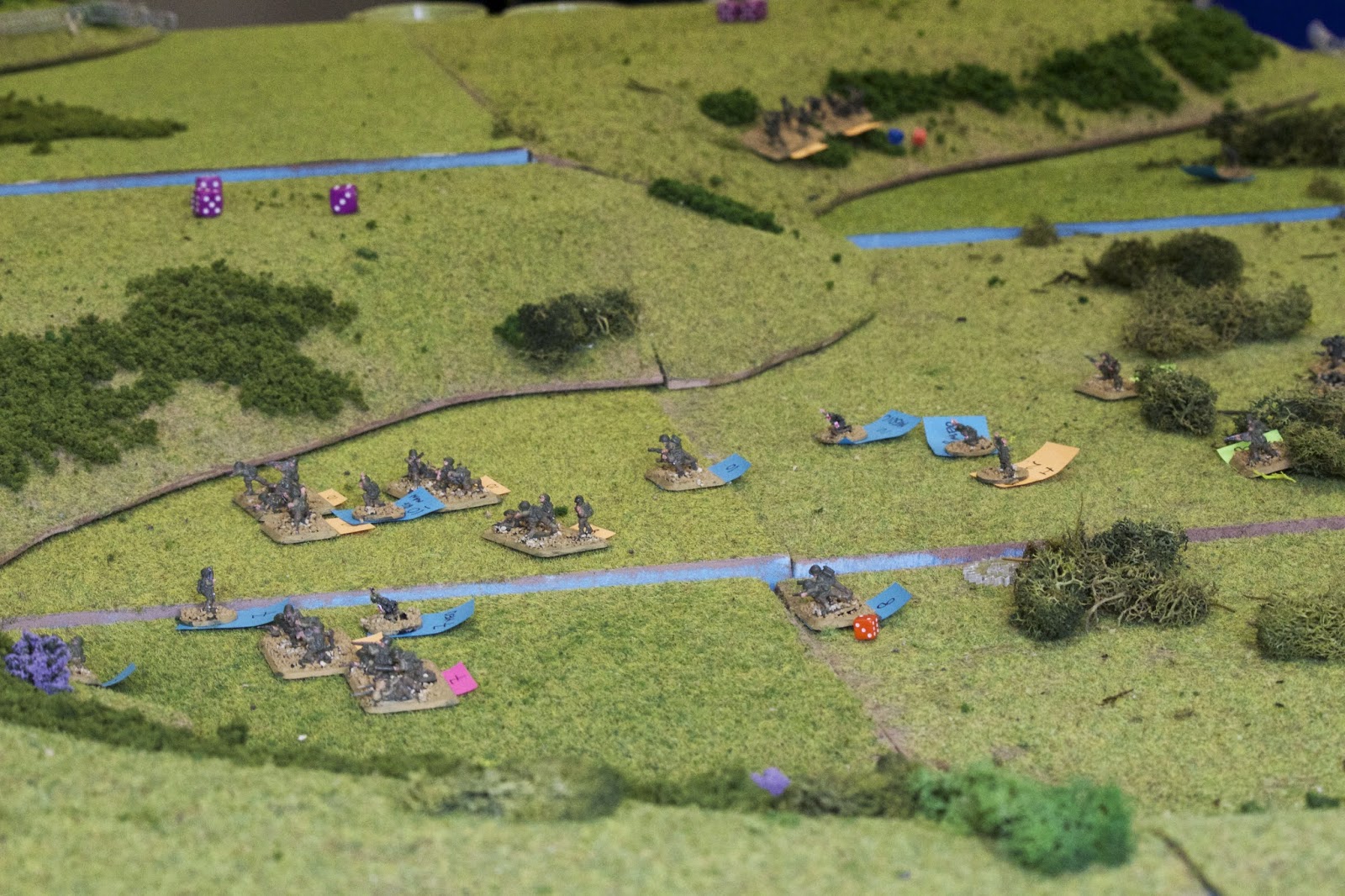 The German FOO was screaming at the battery of 105s on the other end of the line - the support card came up FOUR times before he finally got them to fire on the fifth turn of the card, and its fire came in way long, causing next to no casualties that matter.

It all ended in a bit of a hurry - the German gunner on the shore-facing end of WN62 failed to hold off the group of US infantry, and Rob, who'd been itching to get a flamethrower in range for half the afternoon, finally managed it.

Up in the head of the valley, the MG42 fell silent under sheer weight of incoming fire, and lack of Rally cards, and that was pretty much all she wrote. WN62 will fall to close assault and more flamethrowers shortly, WN64 is vulnerable as soon as the Americans get a couple of sections 'up top', and they have forced a way off the beach towards Coleville-sur-Mer. Applause all round.

I wasn't keeping track of casualties, but from a rough estimate of the bases that got removed plus the number of blue mini-dice (kills) on the table, I'd guess that the Americans lost considerably over 100 out of 300+ figures, and the Germans about two dozen (in fact, up until quite late in the afternoon session, you could count the German casualties on the fingers of one hand.)

IABSM? Absolutely awesome. The 'feel' of the whole game, IMO, was just perfect.

Huge thanks to all my players, and playtesters, to Rich Clarke for the original scenario and digging out his notes for me, but especially to Andy Miller. who despite spending two days helping me build the scenery, still hasn't spent more than a couple of hours with the actual game.