Labels: ancients, battle report, tournament, WAB
Back from the Rushden Phoenix club's annual Axes WAB tournament. Took my Parthians, hastily rebadged as Palmyrans (which has always been a plan, and one of the reasons I went for that army) - basic force being two units of catphracts, two units of horse archers, a unit of foot archers and a unit of allied elite Roman legionaries. 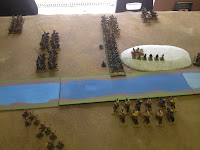 Got there (thanks to a ride with Carl from our club) in good time, so grabbed tea and got set up for my first battle against Paul Tysoe's Late Imperial Romans. The running joke was that several of the LIR armies had fewer actual Romans in than mine (as they were basically packed with Foederati, which to be fair isn't that unhistorical). I felt this scenario was a bit contrived, as it had a river running the length of the table, and deployment zones that were basically 4'x4' triangles. I basically deployed my heavies on one side, and sent the missile troops up the other flank to deal with Paul's bolt thrower. Paul, very sensibly, having units packed with missile weapons, just waited for me to get to him, and shot me up while I approached. It almost worked - the cataphracts are sufficiently slow that juggling things to make sure I could charge him and he couldn't charge me is quite a fine piece of manipulation, and I got it fractionally (by 1/8" or so) wrong. Result, my general's cataphracts got smacked around a lot, and ran away, causing one of those unpleasant cascades of failed morale tests that resulted in most of my army running away. 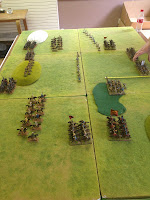 Next up, I drew my chauffeur(!) Carl, who had brought an Ostrogoth army: lots of cavalry, a couple of units of foot and some skirmishers.

I basically got outmanoeuvred in this one, resulting in a capaphract sandwich: the cataphracts really do move like an ocean-going tanker, once you've set them on a path, they even wheel at a penalty. General's unit broke, cue tests all round. Cue some absolutely dreadful dice! No unit in my army has leadership less than 7. Of the five units that had to test, all but one rolled 11s or 12s on 2d6. Arrggh. Cue mass panic, army break point.

This went surprisingly like the previous one, including getting outmanoeuvred and rolling appallingly bad dice!

Conclusion? Mostly - this particular army is somewhat brittle - most of its firepower is concentrated in three big expensive units, two which are difficult to manoeuvre and really do not respond well to being charged. That and I suck at both dice rolling and tactics! :D

All that aside? I had a great time: the WAB crowd (as I think I've mentioned before) are in general a very friendly bunch, and most of us play the game in a very sporting and friendly manner.

Apparently, so do I, as (while coming dead last) I came away with the Best Sportsman award.

Huge thanks to Simon and the guys at Rushden Phoenix for organising and running the tournament, and congrats to Andy Beer of our club for coming a well deserved overall second! 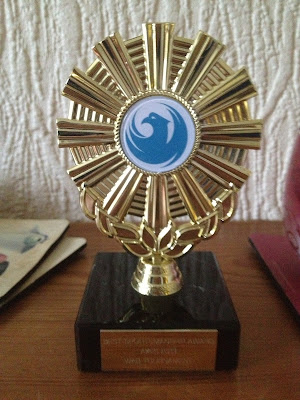