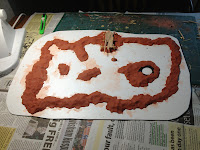 I've been meaning to do this for a while, but since our plans for Easter Monday went out of the window when 'er indoors picked up a tummy bug (fingers crossed I don't!), I got some free time I wasn't expecting to finish this off (I started it on Easter Saturday).

Core ingredients: an A3 piece of plastic card and some DAS modelling clay. First up, I created some edges for the marshy bit (and some lumps and bumps in the middle) using the DAS, trying quite hard to make sure it's a complete unbroken bit, for reasons which will become apparent later. In addition to that, I set one of my 'tree washers' on a small island, as I have designs on there being a willow tree in the middle of this patch of fen. I sprayed the resulting board (having let the clay dry for 24 hours), starting with Humbrol brown, and then in the swampy areas, first Army Painter Army Green then Angel Green. 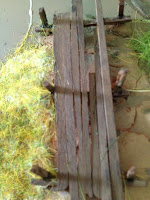 Next up, the remains of a causeway, as a nod to our local archaelogical site, Flag Fen. I wanted something that looks like it pre-dates our Dux Britanniarum campaign and has fallen into disuse, leaving a few bits of timber extending into the fen. I knocked this together from the last of my stash of BBC coffee stirrers and half a dozen matchsticks.

I'm rather pleased with this - that old, knackered timber look is Humbrol brown, and then a fairly heavy wash of Army Painter dark tone ink. It seems to produce the look I wanted with surprisingly little effort. 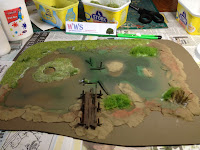 Next, it's just a matter of liberal use of scatter materials, various lengths and shades of static grass ranging from my standard 2mm Javis summer mix (I at least do the edges of all my scenery bits with that so they'll blend in with my terrain tiles when I make them), through various lengths of War World Scenics grass (a new discovery) through to some Noch 12mm (yes really) static grass and some cut down Hornby reeds.

And that's where I am at the moment. More later in the week when all the PVA is dry and I have found a reliably dead level spot for the next stage.
Posted by Mike Whitaker at 09:11