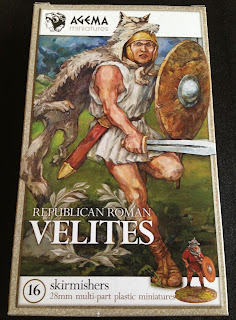 I'm usually pretty on the ball on the world of 28mm plastic ancients, as I have five WAB armies (which are probably 90%+ plastic in total) plus the makings of a sixth (Greek), but I have to confess that the arrival of the Agema Velites had completely passed me by until Grahame mentioned them in the car on the way to Salute. Of course, I don't actually need another ancient army, but they had to be worth a look, right.

Agema Miniatures is a husband and wife team, Greg and Rita - as far as I can tell, he sculpts, she draws - and the Velites are the first of a range for Punic Wars Romans. So, let's have a look! 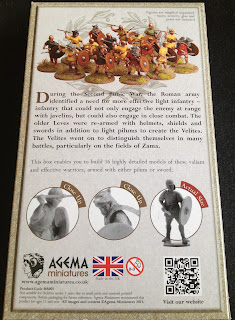 Smaller than the typical Warlord etc box - you're getting 16 miniatures for £9.60 (plus p&p if you order from their site). Lovely box front art, though: very striking. The back has some shots of painted minis, as well as some close ups of the unpainted plastic - if I have a gripe here its that the shots of the plastic look a little soft, and don't do them justice.

Inside, there are eight identical sprues, made, perhaps inevitably, by Renedra. Each sprue has two figures, with separate arms and heads. 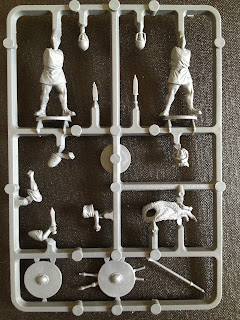 What you actually get, in fact, is


Detail is nice and crisp, and the proportions are much closer to actual normal humanity than quite a lot of the other 28mm plastic ranges out there (Warlord's Early Imperial Romans particularly leap to mind). Also, full marks for providing an empty scabbard for the guy who's stabbing with his gladius. 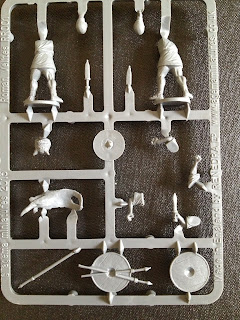 Of course, the upside to having only two figures to a sprue is this has probably been much quicker for Agema to sculpt. On the downside, it makes the number of poses a bit limited - there are only effectively two poses - throwing a javelin or stabbing, but you can have subtle variations by swapping arms and torsos, and some (the more 'elite') can have the wolf pelts.


I had a quick chat with Greg (in fact, I came back after I'd bought a box and got rid of a large pile of purchases to the car) during the early afternoon. It sounds like they've been selling well, and I'll certainly be keeping an eye out. Next up are going to be a box of Legionaries: I hope this will have enough diversity to produce hastati, principes and triarii. They're considering a Kickstarter to get the Legionaries out a little quicker - I'd definitely be tempted.

After that, apparently, the plan is (and I quote):


to progress through Legionnaires, to Carthaginian Citizen and Liby-Pheonician troops, to Spaniards and Celt-Iberians. Who knows, we may even release a plastic elephant set in the future if the range proves successful!

To conclude: I really like these, and I'm very tempted to put together a Republican Roman army - if nothing else, I know I'm good for a couple of years before the WAB GT comes round to that era again!
Posted by Mike Whitaker at 17:36