Labels: alternate reality games, kickstarter, mantic, thoughts, transmedia
Having just spent 11 hours fighting with a recalcitrant web framework at work, I'm going to postpone the posts I had in mind for tonight, as they all actually require some vague approximation to a brain, either to remember where my camera card-reader is, or to wax vaguely coherent and educationally about heraldic crosses.

Way back when, I used to work for the firm that is now producing the hit Moshi Monsters franchise. (If anyone with kids is cursing me for that? sorry - all I had to do with it before I left was one algorithm suggestion that didn't make it into the final game!) The game I was involved with, which some of you may have got hooked on, was the PerplexCity puzzle game. 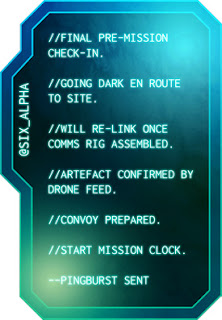 PerplexCity was an attempt to commercialise a genre of games that were often used as tie ins to movies, etc, called alternate reality games or ARGs. To quote Wikipedia:


An alternate reality game (ARG) is an interactive narrative that uses the real world as a platform and uses transmedia storytelling to deliver a story that may be altered by participants' ideas or actions.

Transmedia storytelling means across multiple platforms and formats, such as Twitter, Facebook, the web... as well as in some cases real-world events. (We had several in PerplexCity - one at Abbey Road, one involving a helicopter...)

I have to say, being involved with PerplexCity was great fun, and an interesting challenge, and I still keep in touch with a few of my ex-colleagues.

What's this got to do with wargaming?

Well. It appears that Mantic have started something kind of ARG-like to promote one of their upcoming releases (the Kickstarter for their DeathZone skirmish rules, apparently)... it's currently playing out on the Twitter accounts @six_alpha, @corp_central and @Recon_N32. Well worth following the story - it's rather neatly done within the constraints of 140 characters.
Posted by Mike Whitaker at 21:38