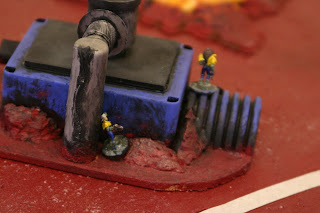 Off down to Swindon for a Saturday at Mongoose Publishing's HQ, the home of the Judge Dredd miniatures game. Unlike the other guys from the club, I stayed over with a friend in Swindon, and thus was there on time, refreshed and mostly awake (and not having driven for two hours!).

Format was seven short scenarios, with (hopefully) a guarantee that you'd not play the same person twice (although there were two linked scenarios designed such that if you played one you played the same person on the next. I started out by getting trounced, twice, and winding up on the same table three times as a result, before I managed to score a whitewash victory in the round before lunch and move up a couple of places.

Not all of the scenarios were 100% perfect - one or two seemed very biased towards fast moving units, and since my force was two Judges, one riding a Lawmaster and able to give the other a pillion ride, I could have won one in a single turn. As I don't play tournaments in win-at-all-costs mode, I did go for a slightly different approach which cost me any chance at a complete whitewash, but hey :D 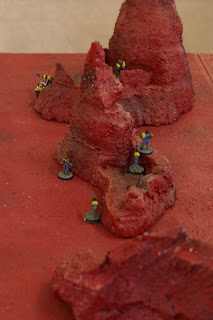 For my two middle games of the afternoon I got Rob from the club and the infamous Dreddpool, in the two linked scenarios, The first really boiled down to who had the better luck rolling dice to find something (Rob), which gave him the interesting defensive position for the second game. Which was closer than I expected, despite Dreddpool's rather annoying ability to bounce around the battlefield like an idiot. I came pretty close to blowing his head off before he finally got me.

Last up I had an interesting scrap on an Arctic battlefield, which required me to take as many of three objectives as possible with my two figures. Not so easy. I got the Lawmaster shot out from under Judge Nicks AGAIN - it happened so many times today I'm seriously considering buying one of the old Citadel Lawmasters to make into a wreck, as it's probably decent hard cover! - but managed to scrape a minor loss.

All told? Fantastic day - bunch of nice folks clearly there for the fun of the game, not to win at all costs,  and the guys from Mongoose organised an excellent day, Final results - I didn't come last (which as anyone whose been following this blog will appreciate is an achievement!, and Adrian and AndyM from the club came third and second respectively.

Apologies, but no comics for this: it was all a bit fast and frantic. But we do have a club campaign night on Monday!
Posted by Mike Whitaker at 21:17