Labels: principles of war, probability for wargamers, series
While driving in this morning, I was listening to the latest View From The Veranda podcast with Neil Shuck and Henry Hyde (yes, yes, pedants - by which I mean they were on the podcast, not in the car - not that it wouldn't enliven my commute!). One of the topics that came up was the Beyond The Gates Of Antares Kickstarter, and the fact that it uses d10, not d6, from which the discussing drifted (as VFTV often does) into designers' choice of dice for such things as Phil Hendry's Augustus to Aurelian.

Somewhere about then it started to click that this series of posts is as much, if not more, about understanding probabilities for game design as to allow you the wargamer to understand (and, heaven forbid, mini-max) the odds. And I got to thinking afresh about the issue I mentioned in my Principles of War battle report the other day, namely the d20 morale roll.

Essentially (and I may have this slightly wrong since I'm working from memory, but the core concept is about right), in PoW units have a strength, which is typically a number around 10-12. Combat casualties reduce this strength, and a morale test is basically taken by rolling strength + modifiers vs a d20, as follows:

My issue with this is that because it's on a d20, it's more prone to extreme results compared to a 3d6 roll. Go back and read up on the odds with 3d6, and then let me demonstrate with a graph. 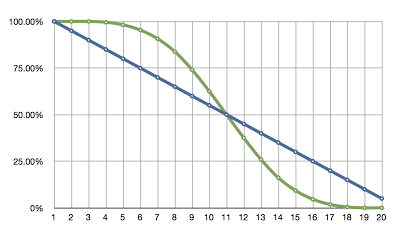 The chart represents the odds (up the side) of rolling greater than or equal to a target number (along the bottom) on both 3d6 (the green curve) and d20 (the blue line). Key things to note:
Take a look at the graph a different way, and you'll see the latter more clearly. 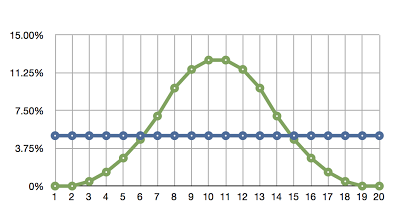 For the stats and math heads amongst you, the green curve (the 3d6) is what's called a normal distribution, Gaussian distribution or bell curve. For games designers, it has the useful feature that extremes are rarer, compared to a linear distribution (the blue curve for the d20). Note that the lines cross at about 6 and 15.  Particularly, note there's a 1 in 20 chance, or 5% of an automatic fail, which seems to me to be a bit vicious on a strong unit.

So, what would happen if we swapped the morale roll for PoW to be 3d6, rather than d20, and for the sake of completeness made 3 an automatic pass and 18 an automatic fail?

Well. The key thing is that auto pass and auto fail become much harder - 0.45% rather than 5%. I think this might be a bit too hard. So - what if we make that 3 and 4 always pass, 17 and 18 always fail. The odds are then a hair under 2% (4 chances in 216) of automatic failure, which feels about right as a compromise, and if we were feeling vicious we could make an 18 two column shifts from the actual result.

I'm not convinced this is perfect by any means, as it seems to make routing a bit harder for units that probably should rout. But it does remove that nasty 5% chance of a perfectly sound full strength unit retiring shaken, which I think is a bit unrealistically excessive. Students of the Napoleonic era may disagree. Perhaps one approach to this would be to also change the table so that instead of the steps being at x2, x3, they're at +4, +8??