Labels: club, show
...and in a comfy chair with a mug of tea and a laptop.

So now it can be revealed (for those of you who weren't there): the Tunnels of Terror. In short? It's 1953. Under the Nevada desert, the various atom bomb tests have caused certain creatures to mutate, and a series of tunnels beneath the sands lead to a cave in which a giant winged ant queen is about to hatch a large quantity of winged horrors which will spell doom to Las Vegas, Nevada, Truth, Justice and the American Way. Cue that mainstay of civilisation, the 508th Infantry Regiment of the US Army.

You'll find the poster we had stuck around Kelham Hall here. It seems that the Vegas Herald and Post is a bit slow to put two and two together regarding the various items on its front page :D

Just to be different, though? Grahame built the tunnels by cutting them into 2" grey foamboard on four sides of a cube. It's basically held together by some cunning carpentry (courtesy of Andy M), and perches on a pair of tables with enough space between to allow someone to stand up.

You'll notice the holes at various points - these open into the centre, and figures can be dropped through (to be caught in foil trays taped to the back), and then moved to emerge from a different tunnel. This is necessary, as its the only way to get from the three sides that squads start from to the fourth side, which is where the queen winged ant is.

Figures were 54mm (ish) toy soldiers, and a collection of assorted giant ants, spiders and rats from various sources. There's a strip of velcro on each tunnel floor and matching on the bases of the GIs to stop them falling off (an issue we noticed in playtest).

Basically this needed about five people to run it - one for each squad, the 'cube jockey' inside, and someone (usually me, as it turned out) working the bits of the cube everyone else couldn't see/cover to answer questions, explain the scenario, etc.

Games typically took about half an hour, the rules fit on one sheet of A4. It's been our philosophy that keeping the games short and fun, and easy to pick up, is by far and away the best approach to keeping people's interest for a participation game.

Of course, it doesn't hurt if your game is a 4 foot grey cube visible from the far side of the hall, and causing people to variously double-take or come up and ask (in a slightly boggled way!) 'just... what? why?' or variants thereon :)

Huge kudos, as ever, to the folks from GCN/COGS for the show, to our game design team (Grahame and Chris), to AndyM for both the woodwork and looking the part (even if his accent slipped), to Carl and Rob for umpiring outside the cube and Dan and Adrian for cube jockeying. I got to do the latter for the final run of the day - it's quite odd: very quiet compared to the babble of the hall, but oddly disorienting. I got confused by a quarter turn for a few moments, despite the inside faces being marked. But it's great fun.

And finally.... I'll let this last photo speak for itself. 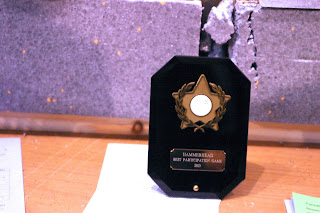