Labels: cats, thoughts
Definitely didn't want to get up this morning, in part because I got up far too bloomin' early for Steel Lard yesterday, and partly because we were both putting off the inevitable, of having Ash, our oldest cat, put to sleep. He had a good three and a half years from coming to us that he probably wasn't due - he must have been 17 or 18 when he arrived, bad teeth, generally run down. But... we do what we do - I married a veterinary surgeon, and feline waifs, strays and the variously broken are her and our thing.

He had a good life, and a peaceful end on my lap.

In contrast, spent the rest of the morning seeing a friend get baptised (by full immersion, or as we irreverently call it, 'dunking'), and then clearing up after Steel Lard and writing up the battle reports... 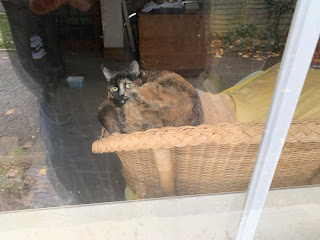 ...And we have another cat, who arrived on Friday because life goes on, and just because we lose one doesn't mean there stop being others who need a home and some love.

Suggestions for a name welcome.
Posted by Mike Whitaker at 18:58