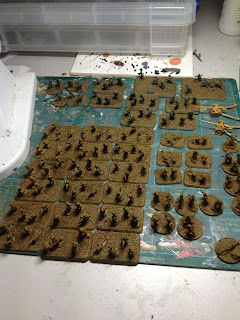 For next Monday's IABSM game - more work on the British and Germans. Yesterday I based the rest of them, and assembled the two Battlefront plastic PAK40s. The figures are BF metals except for the two extra sections of Germans (BF Open Fire plastics) and the two Panzerknacker platoons (Peter Pig German pioneers/tank killer figures).

The PAK40s are quite nice to put together, except that I broke one of the shields and had to glue it together. The barrel's scale thickness, which means getting it off the sprue was a little nervewracking, as was true for the trail legs.

I'm out of Tamiya Dark Earth textured paint, and worse, so is Trains4U - I did consider mixing up a PVA/sand/paint gunk, or using a lightweight filler ('spackle' to you Americans), but in the end I went for a layer of PVA and some Javis dark brown scatter. I'll do the rest of the painting next, and then add static grass.
Posted by Mike Whitaker at 18:43