Labels: club, show
6 am alarm. Shower, half an hour with the laminator that I didn't get done last night, pack the car. Off by 7:15 with Carl from the club, picking up ex-secretary Rob at 8:15, pulling up outside the exhibition hall - dear Lord, it's HUGE - at 8.30.

We were fully set up by 9:15, after having had a bacon or sausage sarnie and a mug of tea. One thing in Hammerhead's favour - the Newark showground has onsite catering that actually understands. Their sausage sandwiches are three proper bangers in a large bap, and their tea is proper PG tips made with boiling water. 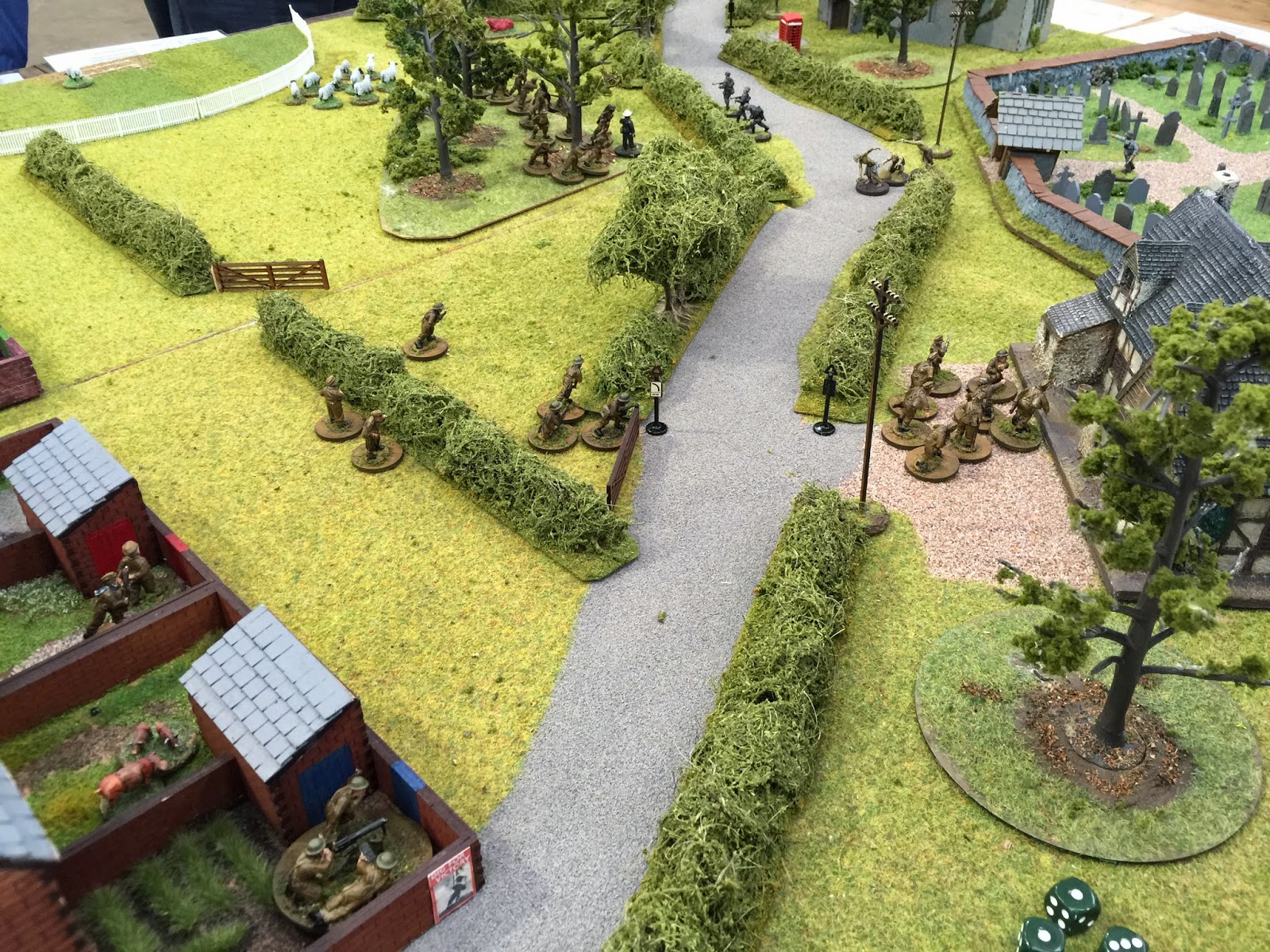 A couple of trips round the stalls to grab some 25mm round bases off Warbases (activation counters 'cause we couldn't find outs) and a new tape measure off Lesley's Bits Box 'cause I forgot mine. Good to go.

Perhaps surprisingly, we only got three games in. The first one was a win for the Home Guard - a very aggressive start, which set the pattern for the day, in fact. They managed to get a section into the parish church, and from a combination of the roof and a well-sited Lewis gun, managed to drop Skorzeny. This is the only way the HG can win - if they don't kill him, they will simply eventually get overrun by zombies.

Lunch was again more than decent: more tea, and a burger and chips. The catering staff seemed to work on the 'poor dears, they must be starving' approach - take one large plate, add a decent sized burger, fill every bit of available remaining space with chips.

Game two was excellent - the three young lads plus one dad playing the Home Guard also waded in, but then got bogged down. Hodges' van (with a Lewis gun section inside) pulled up pretty much outside the lytch-gate to the graveyard, but then spent what must have been nine or ten rounds just trying to beat off the zombie horde enough to actually get out. It was starting to look really dicey for them, until they finally managed it, piled out A-team style, round the back of the van, into the graveyard and opened up on Skorzeny with everything they had. 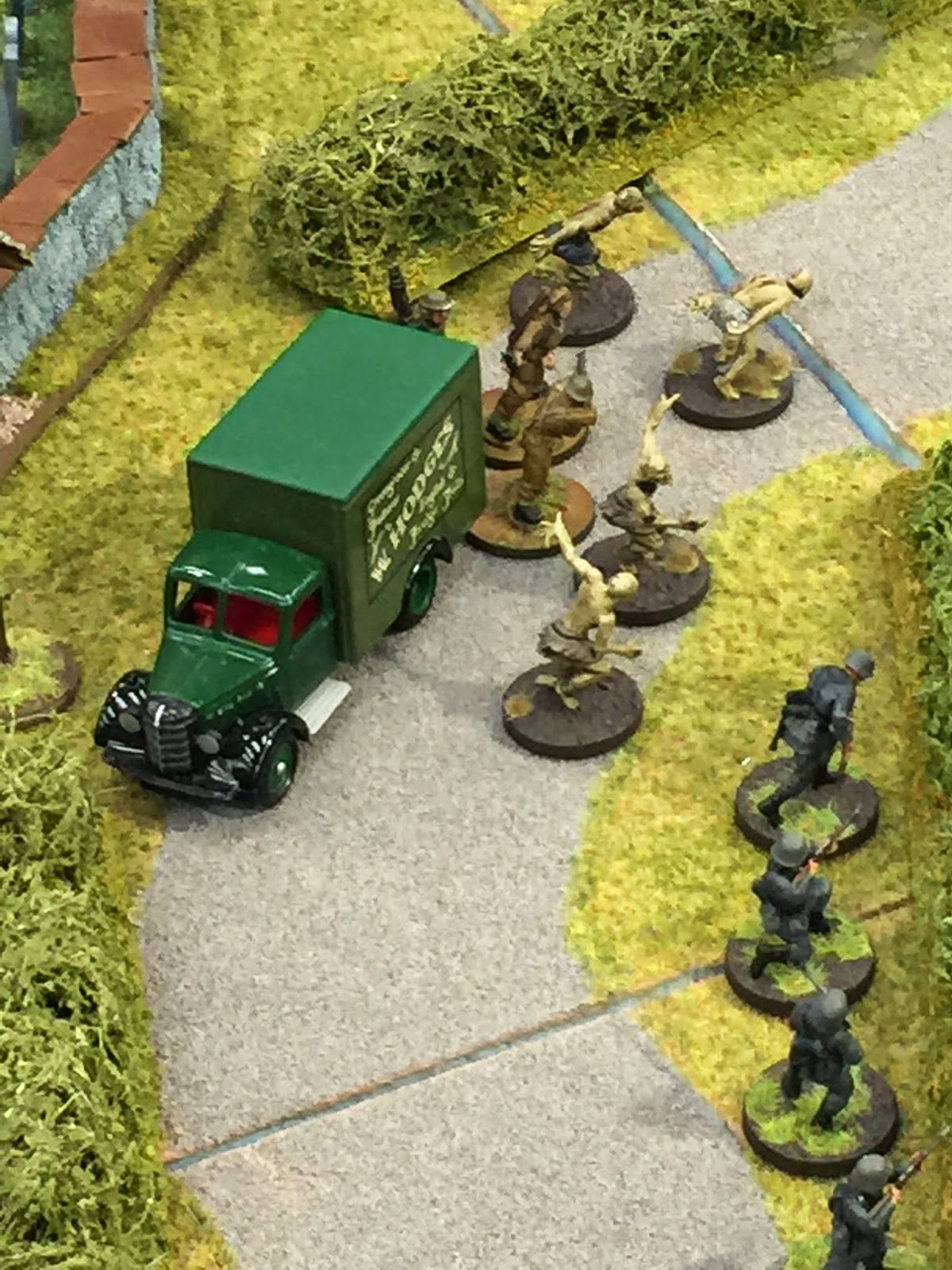 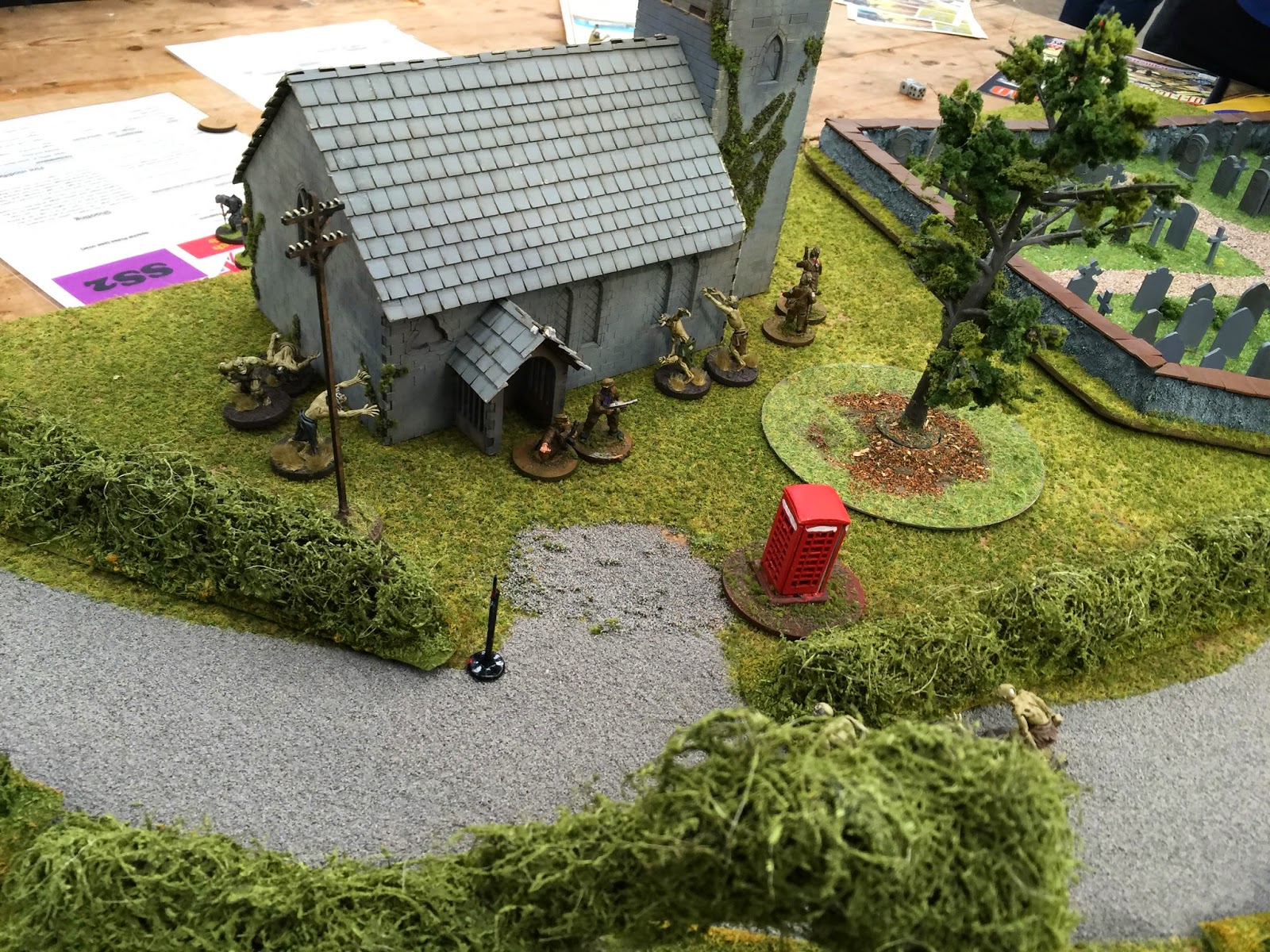 Game three swung this way and that - Jones' and Hodges' van and Wilson and Pike's section did a great job of clearing out the first couple of waves of undead, but again got bogged down by weight of numbers. What they DID do was enable Captain Mainwaring, Private Godfrey and a section to run up the other side of the village past the cricket pitch and make for the church. With hindsight, they should have gone straight in, or Jones should have stopped mowing down zombies with the van and headed in. As it was, Jones' section managed to get a few potshots at Skorzeny to no effect, before Jones went down under a tide of zombies. Mainwaring's section made it into the church, but the zombies were too close behind for comfort, and it wound up with the Captain and Godfrey valiantly trying to secure the rooftop trapdoor while a lone unnamed private dodged fire from the Germans and tried to kill Skorzeny.

2:1 to the Home Guard overall, and a great fun day. Thanks to Sally and Kallistra for organising it, to Warbases and Lesley's Bits Box for selling us stuff before opening time.

My swag haul was one tape measure, the rest of a pack of 25mm round bases, two Warbases 15mm Horsas, and one of their new 28mm Model T Ambulance MDF kits (that thing is gorgeous). That and a lot of assorted leaflets and business cards from places as wide-ranging as the Stafford games club and the Royal Armouries in Leeds. It may be shaping up to be an interesting summer!