This week, Carl ran an ECW participation game using Warhammer ECW, which was a refight (after a fashion) of the Battle of Powick Bridge.

For those unfamiliar with this, it was more a skirmish than a battle, with the Royalist cavalry under Rupert duking it out with the advanced Parliamentary cavalry of Essex's army, who were chasing after a baggage train containing the University of Oxford's silver plate. 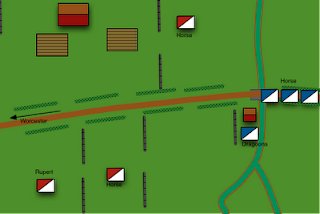 The battlefield basically consisted of the aforementioned river bridge at the Parliament end of the table, over which a hedged lane ran between fields along the length of the board towards Worcester and the Oxford silverware. Gary and I took the Royalists, and Carl and Al the Roundheads.

It didn't start at all well. Gary's unit of horse, camping in the field next to the manor house, were the first to notice the Roundheads, charged, were repelled, and chased off the field in disarray, Al producing some prodigious dice rolls to do the deed.

On the other side of the lane, I sent Rupert's horse down between the hedges, to charge the second unit of Roundhead cavalry. This turned into a running battle of charge, retreat and countercharge, not helped by Al's dragoons lining one of the hedges, which I somehow managed to avoid taking a full first volley point blank in the flank from despite several attempts.

Meanwhile, the third unit of our horse cut across the lane towards the manor house. Gary and Carl had another back and forth cavalry scrap, eventually resulting in Gary's unit getting chased off. Back at the lane, the dragoons wavered and fled at the sight of Rupert's troop chasing off their opponents, and I led the Prince's troops into the field and delivered the final charge on Carl's cavalry to wrap things up.

Fun game - I have to admit, I was expecting to lose a lot of units very fast to failed break tests, but a combination of fighting longways down the table and some decent dice meant we had an awful lot of charge, retreat, rally, repeat...

A nice small encounter: bodes well for our campaign starting in April.