Labels: battle report, club, colonial, old school
Down at the club, kickin' it old school! (Aside: no battle reports for the last two weeks, as the 9th was the club AGM and the 16th was a rules test for our Hammerhead display game. Of which, no doubt, more later!) 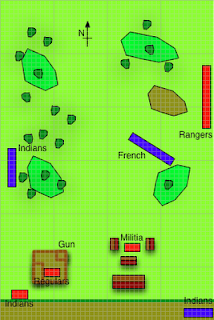 To be precise, Grahame produced a load of 15mm French/Indian wars figures, and we had a fun skirmish that wouldn't have looked out of place in a Don Featherstone book. The rules, admittedly, were a bit more modern, being a loosely adapted set of DBx, with Grahame umpiring me (the British) against Adie and AndyB (the French).

Basic premise - the British, in the person of a regiment of redcoat and some settlers and militia, are garrisoning a fort and a small village by a river on one of the short sides of the board, aided by a contingent of Roger's Rangers and canoe-borne Indians, both of whom were out on foraging/reconnaisance trips at the start of the game and would appear on my turn 1 on any board edge of my choice. The French, meanwhile, with a couple of smaller line units, a horde of Indians and some decent skirmish troops, are tasked with, unsurprisingly, taking the village.

I decided to deploy my Indians near the fort, just in case the French decided to do the same. Andy, however, opted for the other end of the river. What the French didn't expect was the returning large contingent of Roger's Rangers appearing right behind Andy's force after their first move, though! My rolling a six for their movement pips definitely helped.

Some of Andy and Adie's skirmishers rushed the village, while half of Andy's force turned to face the Rangers and Adie sent a large Indian war band across from the western edge to help out. First blood went to the British, as the gun in the fort managed to spot the advancing Indians in the wood to the north and just catch one of them.

It was a pretty dour struggle, as the saying goes, from there on in. The militia and settlers managed a pretty sterling defence of the village, being driven out of one building but managing to hold another almost till sunset, and keeping the Indians that landed on the river bank out of the church. My Indian war band tangled with some of Adie's forces, and kept them out of the village. The Rangers took a beating, but basically held up one and a half times their number of troops (including taking out a gun), which if they'd managed to get to the village would have meant it was pretty much all over.

The British line spent, with hindsight, far too long sitting on their backsides in the fort - I should have brought them out earlier to help clear the village.

All in all, though? Fantastic fun, and I'd love another go.
Posted by Mike Whitaker at 09:16