Labels: battle report, club, operation: squad, WW2
The first game of the new year, down at the club. Lowish turnout, but out of those who did we had four plus me for the Op: Squad scenario(s) I'd spent the past couple of days working on, so, off we went.

The briefing? Basically, it was 0025 or so on June 6th 1944, in a quiet little corner of the Normandy coast that didn't manage to get mentioned in the history books (that's my excuse and I'm sticking to it), A British rifle squad (Rob) was being dropped by glider by a small river bridge defended by a Wehrmacht squad (Chris) while, a little way east, a squad of Paras (Dewi) were attempting to take a small village garrisoned by some PanzerGrenadiers (Dan). In both cases the Germans get only half a squad until the noise wakes the rest of them, and in addition its dark, so everything past 20cm range requires a Spot roll unless someone fires off a flare.

Had we had six players, the other pair would have had a bunch of US Paras dropping in to blow up a railway line before the Germans garrisoned a few hundred yards away (off-table, cause we're short on 28mm buildings!) could stop them. 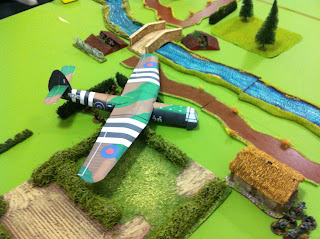 We actually got to run the scenarios twice, with a little fine tuning the second time (slit trenches aren't good enough cover for 3d6, really): first time was a rather one-sided massacre for the Germans in both cases: in the second, Rob's Rifles fought to nearly the last man to take the bridge, but Dewi's Paras didn't quite do the job, partly because their random scattering on the drop caused all the Sten-armed guys to be half a field away.

The Horsa, for those wondering, was a Fiddler's Green card kit scaled to 28mm (printed out at about 96%) - it was somewhat fiddly, and I left the undercarriage off in the interests of getting it finished in time: it does, however, look the part. There is also no truth in the rumour that the small cluster of figures in the bottom right are my first entry to the Analogue Hobbies' painting contest :D (I'll photograph them properly as soon as I'm done writing this blogpost, honest, Curt!). There does. however, appear to be truth in the rumour that parachuting Bren gunners have a magnetic attraction to churches.

Lessons learned: playtest, Always playtest. :D also, pay attention when handing out units (I mistakenly gave Chris the PanzerGrenadier list and didn't notice till halfway through turn 1), and don't let people play their own squads instead of the ones you designed in (especially if unpainted :D just kidding, Dan!) as it can unbalance the scenario.

Also, mortars in Op: Squad are a bit gross - it seems far too easy to hit a target dead on.
Rough and ready rules for paras and gliders on a 120cm square table:

I defined a drop zone 120cm long by 60cm wide for the paras, rolled 2d6 x 10cm for distance downrange, 1d6 x 10 cm for crosswise drift for each figure.

For the gliders, I defined a target point, then rolled 2d6 x 10 cm to determine where on the table edge the glider crossed, drew a line through the target point and measured 2d6 x 10cm down it to where the nose of the glider ended up. Horsas have a drag chute, and I gave the British player the option of deploying it to reduce that distance by 1d6 x 5cm.

Then, for each figure, roll 2d6 against the normal pinned/wounded/dead table, plus 1 or 2d6 depending on what kind of terrain they landed in and an extra dice if they pulled the 'chute on the Horsa.
Posted by Mike Whitaker at 20:55