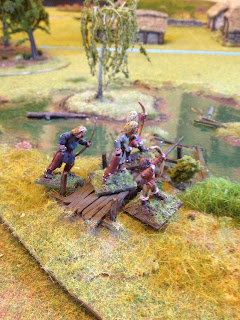 I'd just finished another couple of plain terrain tiles (600mm sq hardboard, 600mm sq x 50mm blue craft foam and Javis 'hairy' summer grass sheet), so we went with my tiles rather than the usual Citadel cloth, as the grass on them matches the grass on my various terrain pieces. (You should be able to spot the two pieces that are Andy's as a result!)

We rolled the village raid, with the village in the centre of the right hand edge, and the Britons coming on from the worst place possible, namely the top left corner. This time, we did remember that Andy's sown all his provinces with watchtowers, so he gets to arrive a turn earlier than he otherwise might. This meant I only got a turn's head start. 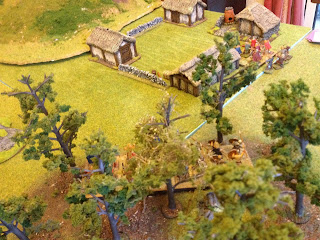 Easy enough plan - I packed Beornwulf and a unit of warriors off to do the looting, and the rest to head off the Britons.

Regular readers may now point out to me that I'm going against several bits of my own advice, including a) remember the objective and more importantly b) your best chance comes if you search in parallel with as many groups and Big Men as possible.

And I paid for it. 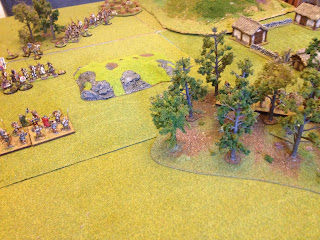 And yet, despite that, it nearly worked.

First up, Aelfric and the hearthguard got to face off against Andy's hearthguard and a unit of warriors in shieldwall.

First round definitely went my way, as I had the proverbial nice fat fistful of useful cards, and Andy tried his best but (being restricted as to how fast he can move in shieldwall) came up short. 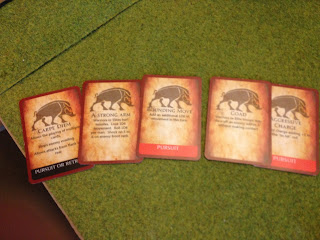 As you can see, I had a Carpe Diem, a Goad, a Bounding Move, a Strong Arm and an Aggressive Charge, all boar-suited. So loads of dice, and I managed to drive off one unit, and make him fall back.

In the next turn, I got to activate again and charge again. With ANOTHER Strong Arm. Round two... was a bit tougher, in part because a third unit of Britons had come up in support. In fact, one of my hearthguard units lost its amphora and ran away. Fortunately, I managed to pull the other unit away before it got thumped again. 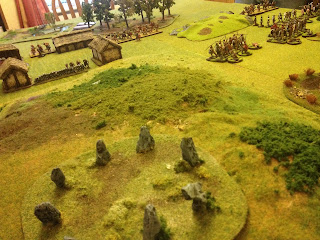 By then, Ecgwine's warriors had made it through the woods, and were in the process of lining up against Maximus Minimus and a group of 18 British levy, who were also being annoyed by Lavinia's archers.

That fight went through multiple rounds - including Andy having absolutely miserable luck with movement -winding up an inch short on a charge, due to subtractions for shock when he only actually needed to move an inch. 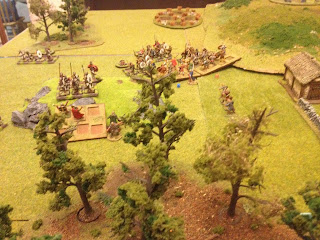 I lost count of how many Strong Arm cards I played in that battle - at least two, if not three.

Meanwhile,  my remaining hearthguard unit pulled back behind a hill, and Andy's missile troops proceeded to pick on it. As it was down to two figures, I advanced on the missile troops to chase them off. Which was all very well, but exposed me rather to Andy's survivors from the original fight, who were in discinctly better shape.

Despite him failing to make contact first time out, he won that fight too. Cue departure of second unit of hearthguard. Cue more loss of my force morale. 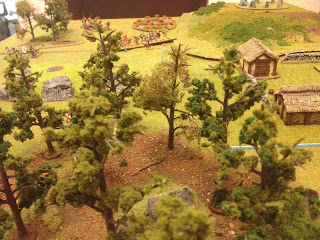 Back in the fight with Maximus Minimus, Ecgwine's warriors managed to drive off two off the three units of levy and left the third sufficiently shaken not to be a threat.

I moved my missile troops to try and take some shock off Andy's hearthguard. Sensibly, he charged them away.

Meanwhile, the looting? Not going very well. Going to have to win this one by clearing the field of Britons, methinks. 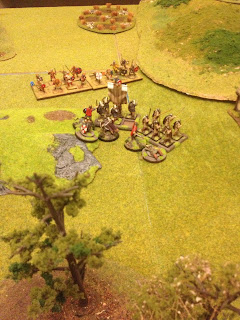 So it's crunch time. Ecgwine's warriors turn to face up against Andy's hearthguard. They're not in shieldwall, and I have a decent hand...

Barring the fact that it's down to the mercy of the activation deck who goes first, and I don't have a Step Forth or an Evade to change this. In fact, I haven't seen either all game (just four or five Strong Arm's instead!).

Game over :D Well - in two rounds of combat. I survived the first, losing one group doing so, as did Andy. But the second round was hearthguard against warriors, and that was only ever going to go one way.


This definitely ranks as one of the best Dux Britanniarum raids Andy and I have fought, probably ever. As ever, my thanks to Andy (whose report can be found here) for a cracking game.