Labels: hastings, history, holiday, normans, saxons
Just as an aside, these brief holiday postcards, for want of a better phrase, aren't in order of visit - we did Bayeux on the way across from Brittany to the Somme area - but in some vague thematic/related order of history.

So - Bayeux, then. Home of one of the most famous bits of embroidery in the world. Anne and I have been before, but it was mumble decades ago, and I don't remember much - I certainly am pretty sure the building it's stored in has been improved considerably since we saw it.

What can be said about it that hasn't been before? It's a stunning, quite stunning piece of work. The audio tour is new (to us), coming in both adult and kids versions (which James appreciated). Surprisingly, though, it translates very little of the Latin: fortunately my grade A O-level meant I was (still) more than equal to the task of most of it!

Beyond the tapestry there's a museum/display area with some fantastic models, including a cathedral being built which I'm sure was a bit of a reference to Pillars of the Earth. The other thing in there I did grab a picture of, was a text description of the dyes used and a few samples. Again, if you're a Dark Ages/Early Mediaeval gamer, this is useful! 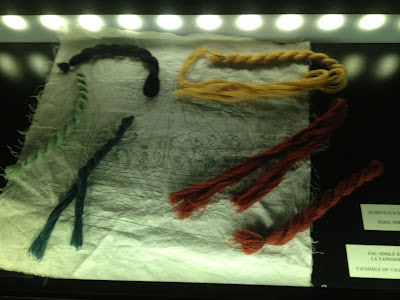 I also left the shop with a 'Guillaume Le Conquerant' t-shirt with a portion of the tapestry art on it... of which more later.
Posted by Mike Whitaker at 08:30