One of the reasons for the silence on here of late is that we've been on vacation - specifically a week in France and then a week pootling along the South Coast of England. Quite a lot of that vacation threw up some wargaming-related stuff, starting with la Musée des Temps Barbare in Marle, to the north-west of Paris (in WW1 trench country).

The museum is built in a three-storey disused watermill plus extensive grounds. In the mill there are displays of archaeological remains from the Dark Ages (Frankish/Merovingian era) as well as copious historical wall displays covering the history of the period in France and some marvellous models of Frankish buildings etc.


On the downside it's all in French, and certainly for our visit, the curator was (I suspect) not confident enough of his English to be much help. As it was, we got by with a combination of my (passable) French and a dictionary. I even managed a conversation about me not being a archaeologist but a big fan of the period and a wargamer, and he mentioned that they had had the Ermine Street Guard visit for a reenactment day.


The awesome bit, in terms of the sheer amount of work that must have gone into it, is outside. Out the back, you cross a bridge over the mill leat, and find yourself in a small (half a dozen buildings) Merovingen village. It's all beautifully constructed out of period materials, based on their best guesses as to what the buildings might have looked like from archaeological evidence.

We spent about twenty minutes checking out the buildings, with James (my son) taking copious photos (since he'd just discovered how much fun my DSLR is) - most of the shots in this article are his.  We were, it has to be said, pretty blown away by the workmanship.

And then we double-checked the French handout we'd been given, and realised that this wasn't, as we'd thought, the larger of the two historical reconstruction areas, but the smaller. By quite a long way.

Across a small stretch of field and behind a hedge and wall, we came to the other reconstructed area.

Again, based on archaeological findings, and painstakingly reconstructed down to the smallest detail (I was particularly taken with the various almost casual arrangements of animal bones in places where they might realistically have been dumped).

The bit that made me smile (and instruct James to take several photos of) was a display of naturally dyed wool, hanging both inside and out of one of the buildings. If like me, you struggle to be sure that your Dark Ages armies are painted in convincing colours, then you might find the following images rather useful. 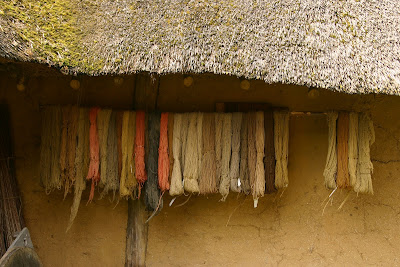 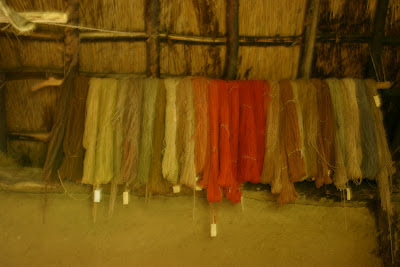 So. There you have it. I strongly recommend a visit, but do take a dictionary, a good camera, and someone who speaks decent French.