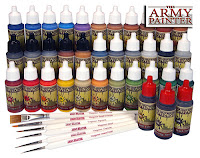 For a while now, as is probably clear from the blog, I've been using Army Painter primers and dip, but my main paints are, in fact, Games Workshop's Citadel range.

Several things have recently combined to change this.

First off, dear old GW have just announced a complete revamp of their colour range, which seems to me to be a completely pointless exercise in selling more paints with different names that you can't match to the previous ones. Colour me cynical if you like, but there was nothing wrong with the previous range...

Ok, actually, there was. Two major things, in fact. Number one, the £$%^&*() lids. Ok, there are tricks to keep them open with a cocktail stick, but the lids plain do not stay open. Second, the paints are, at least as far as I've found, very variable in thickness and consistency - sometimes from pot to pot in the same colour.

Now, I have to admit, I've tended to be somewhat sloppy in the past, and I will dip brushes into the pot, which unless you're very careful, is ultimately bad for the brush, as, when you get further down the pot, it becomes progressively harder to dip a brush without getting paint caked on the ferrule. This changed recently, as I picked up (while in Maelstrom) an Army Painter 'Wargamer: Character' brush. Now, sure, it's just a brush, and I could have spent the same at any art shop and got something of similar quality. However, a) the triangular handle actually works for me - my hand seems to cramp less while painting and b) the Army Painter guys do have their psychology of brand naming right! It is a brush I find myself not wanting to ruin, so I have been taking more care, and using a palette rather than dipping the brush into the pot. Which does lead to point three about GW paints - they're a pain in the backside to get small quantities of paint out of.

Interestingly, I seem to paint better from a palette - as it's less of a pain to load the brush, I find I tend to paint with less paint on the brush. Combined with having a decent brush I want to take care of, this has actually made me prepared to have a stab at smaller details than I otherwise might, and get them a lot better.

Next off, I started painting a unit for my imagi-nation, which (for complex imaginary historical reasons) have yellow uniforms. Since I'm lazy, this involved a can of Army Painter Demonic Yellow primer, and annoyingly the Citadel yellow I have isn't quite a match for touchups. However, the new Army Painter Warpaints explicitly do have matches for the primer colours. And they come in dropper bottles, which makes the whole 'getting paint onto a palette' process much easier with less waste of paint. At the same time, I've also been trying ink washes rather than dip, and the AP inks are much better than the Citadel washes.

And the final nail in the coffin? My FLGS is hopefully going to stock the Warpaints.

Result: I'm planning on ditching my Citadel paints as they run out, and replacing with the Warpaints. If I can convince 'er indoors, I may well ask for the complete set for my birthday in August.
Posted by Mike Whitaker at 17:03