I need some for my Imagi-nation army, the Duchy of Elland, and (despite the title of this post) Wargames Factory don't yet make any. 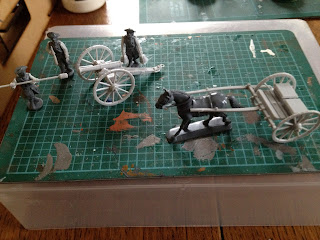 Now, I could have bought some metal artillery, but to be honest, I couldn't be bothered :D So after a little research, I acquired a box of Victrix British Napoleonic Foot Artillery, and (at Salute) a spare sprue of Conquest Games' horses (for the aforementioned nefarious purposes).

Now, I'll be the first to admit that the guns are probably well out of period, but ... hey, it's an imaginary army, so I'm not going to get that worked up about it.

The image on the right gives you a rough idea of what I managed: gun, limber, arms and tools from the Victrix box, onto WF WSS Infantry bodies and the heads with floppy hats. The limber horse is from the Conquest Games sprue, because a) it doesn't have a saddle to speak of, and b) they actually make a horse that's only walking. Missing from this shot is the extra bit of harness to affix horse to limber: not quite sure how I'm doing that yet, but a spare rifle strap from the WSS Infantry set is being eyed up.

I've in fact made two sets of guns and crew, and the final painted versions will be on the Duchy's blog in the next week or so.

As an aside - the Duchy of Elland blog is reserved for (for the most part) in-character updates and battle/campaign reports - modelling activities will continue to be posted here, with a link to and from the other blog.
Posted by Mike Whitaker at 09:30