Labels: dip, ECW, painting
So, it came to pass that about a year ago, I had my first game of Warhammer ECW, for which I wound up painting all of a Warlord Pike and Shotte Battalia box in about a week. As (unfortunately) seems to have become something of a habit, I based them on the night before and was spraying varnish on the figures in my open office doorway at about 6am on a surprisingly chilly April morning.

The inevitable happened - as you can see in the close-up shot from the Battle of Powick Bridge, and the banner image at the top of this blog, the varnish dried all misty and grey.

There's a whole load of solutions rumoured for this: it's clear, for example, that slightly wetting the figure makes the mist go away, but only until the moisture evaporates. Some folks suggest revarnishing with gloss and then again with matt, but the solution I found, which really surprises me, and works? Olive Oil. 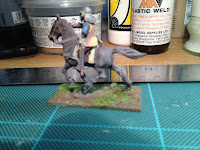 So - here's one (slightly out of focus) Warlord Games Royalist cavalryman, with that soul-destroying grey mist all over him. (I cannot tell a lie: the first time it happened I swore - a lot). 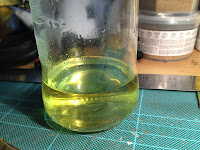 And here's a jar of perfectly ordinary, non-extra virgin, not garlic-infused or anything else, kitchen grade olive oil, acquired, with permission and even blessing (she's is a gamer and role-player, and sometime figure painter, and was, I think, intrigued as I was to see if it'd work) from 'Er Indoors.

Just visible bottom left is a cheap and cheerful large brush from Hobbycraft, which I was quite happy to ruin (in fact, it's one of a rolling stock of three or four I use for dip).

Wow. Certainly works as well as wetting the figure. Even better, leaving it to dry, and then wiping off a little with a tissue, does actually seem to fix the problem permanently.

It gets better! Turns out that that brush load did about 8 figures - the thinnest smear of oil is all you need. For the next one I loaded the brush and wiped it off on the inside of the jar before starting, and still managed to do about 5 cavalry with it. From then on, I actually just ran the brush over the inside of the jar to pick up a smidge of oil and used that each time - it's amazing how little it takes. It's worth a quick wipe of the excess, but you can pretty much dry-brush them, and the oil does tend to flow and wet the whole surface. It does, though. dry to a slightly oily, satiny sheen.

And before you ask? No, I haven't revarnished them. By the time I was done oiling just over a hundred figures it was 7pm, and quite chilly outside.

And contrary to what my wife may tell you, I do learn from my mistakes.
Posted by Mike Whitaker at 09:40