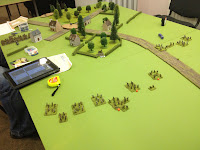 Last night saw me umpire a game of IABSM at the club between Reuben (as the Germans) and Carl (British) - we used the opening scenario from the rulebook.

You will note the rules (on my iPad), Rueben's nice 15mm Germans and British (and please ignore the MG42 team's paint job, he says), and some custom made Warbases blinds markers, which I am very pleased with.

As an introduction to IABSM it went pretty well - I completely spaced on a couple of rules, but nothing that I didn't realise and fix (hint, the fire table returns hits not shock!) :D 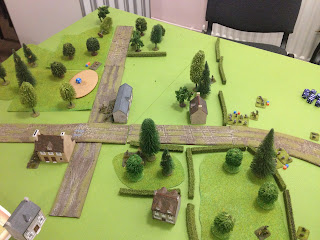 Carl advanced until he found - the hard way - Reuben's two MMGs, which he'd separated and left one Big Man with each. It took him quite a bit of work to winkle them out of their well dug in positions, but he did, in the end. I suspect that Reuben could have done a little better if he'd supported them with one or both Zugs of infantry rather than left them on their own.

We ran out of time, but it would have been interesting to see if Carl had managed to winkle the two German Zugs out of the buildings.

Below are the very nice Warbases blinds markers - for those curious, the 10 markers (five of each design) plus postage came to £9, and I am as happy as a very happy thing. Debating whether to base a couple of scout-type figures or vehicles on each of the appropriate nationality and base them, or let them be. If you want some the same, I'm sure you can drop Martin from Warbases a line via http://www.warbases.co.uk/ and ask for 'the IABSM blinds like wot Mike 'ad' :D 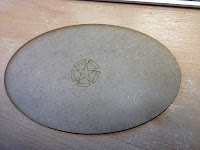 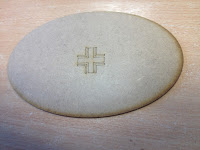