Labels: battle report, dark ages, dux britanniarum
Not the usual Dux Britanniarum game - this one was run by an old friend from Uni, Tim, who turns out to be another Lardie fan, and has been playing Sharp Practice and other TFL games with several other of my Uni friends for a few years now... and I hadn't seen Tim in most of two decades until yesterday. Due to being roped in as Dad's Taxi Service at the last minute, I was about half an hour late making it to the session, but since I was the only player who's played Dux Brit before, this wasn't much of a problem!

We played a raid scenario, two of us on each side with Tim umpiring. MichaelA and I took Uffa's Saxons, raiding the church of St Vigor, not far from the city of Venta Belgarum (Winchester), from a base on the Isle of Vectis (the Isle of Wight). The defending forces of Constantine the Just were handled by Phil and Chris.

Tim plays in 15mm, with some really nice figures painted by Matt Slade. Due to the restricted size of his dining table, he also uses custom rulers, marked at 20mm = 1". Which was fine, except that I've just about got my brain tuned to estimate inches! Terrain was a piece of heavy curtain material over some bits and pieces to create hills etc, and some Woodland Scenic trees, and buildings painted by Tim's wife Jackie.

We got lucky with the start of the game, with three moves before the British appeared, which got us most of the way to the objective, pausing, because we could, to set the village barn on fire.

Things worked out, at least to start with, quite well: we managed to get a substantial force past the church to intercept the approaching British and keep them out of our hair while we ransacked the place. Unfortunately, the card decks very much worked out in the British favour, and a combined unit of British comanipulares and warriors got first strike on Michael's hearthguard...

Which, potentially, wasn't going to be that bad, since I had two units of warriors about to enter the fight, who must have been no more than 6 ... erm ... "Tim"ches away.

In the next couple of activations, first one then the other Saxon hearthguard ran away, but, fortunately, between us we made the necessary looting rolls in the church, and managed to pick up a nice, expensive and easily portable load of loot. It was decided that at this point discretion was the better part of valour, and we chose to beat a hasty and hopefully treasure-laden retreat.

And we'd have got away with it too, if it wasn't for those meddling British!

As seemed to be becoming a recurring theme with this raid, it all started so well, with some excellent rolls to put some distance between us and the British. Sadly, though, by then our hearthguard had misplaced its amphora, and one stand got well and truly clobbered by a big unit of British levy.

And then Phil produced a 'Bounding Move' card, rolled four dice for the pursuing British... and got twenty-freaking-one!

We got all but one unit of warriors off the table, but our force morale was down at three, and it all boiled down to which of about four activation cards happened first as to whether that last unit got off the table before one or other of the British forces got to it.

This is the first raid I've played in which the Saxons' withdrawal was actually contested, so Michael and I are stacking up Retreat cards. In fact, we have an entire hand full of them. 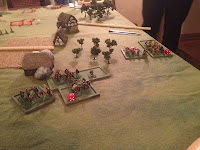 We came so close. Constantine the Just (who was wounded in the earlier fight and down to being a level 2 Big Man) activated first, used one activation to send in the unit of warriors closest....

Cue sighs of relief from Michael and I. Except, of course, the British Lord has another activation...

...and rolls a six and a ... cocked dice that was probably a six. As it happened, so was the reroll!

Like many, if not most, of the Saxon victories I've been a part of, this one was decidedly Pyrrhic. Technically, as we satisfied the victory conditions, we won. We lost enough men doing it, however, that the British (who lost a grand total of about three) came off distinctly better.

A great game - fantastic to meet up with a bunch of old friends (including a coffee mug I'd left at the workplace I shared with Michael and Phil in 1994!) again, and I hope to do it again soon.