A horse of a different colour part 8 - "mostly bay"

Labels: a horse of a different colour, horses, painting, series 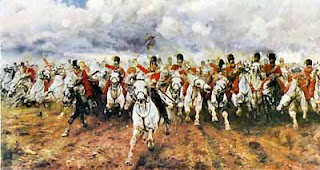 So, if you remember from back around the end of January, we asked the question "what colour should the horses in my unit be?", and my second answer was "Mostly bay, unless there's a historical or other reason why not."

So, here we are with a cavalry unit, horses all assembled if necessary, and ready to paint, and that question comes up. Really, what follows is a series of followup questions.


First up, are these a unit with some specific, well known, traits? I'm thinking, obviously, of the Scots Greys as one example, or a Native American plains Indian tribe as another. If so, problem solved, and get cracking.

To take the Scots Greys as an example, most of the horses are going to have the G gene, on top of a base colour which will be the usual mix of mostly bay, and the rest black or chestnut. This means that most of your horses (the ones with an E gene) will have darker manes, tails and probably a darkening around the muzzle, but the coat colour will range from quite a dark grey, through to almost white, with, on top of that, some dappled, a couple maybe flea-bitten (probably on the mounts of older-looking riders, as it's a colour that takes time and age to evolve in a mount) and maybe even a bloody-shouldered for variety. It is, though, worth bearing in mind that not all the 'greys' may be a result of the G gene - some might be blue duns or blue roans, or possibly a whiter horse that's a cream or a dominant white.

Next: if that doesn't apply - are these bought or bred? To put it another way, does the unit in question treat them as a commodity or does it value them above and beyond that?

This is where the fun starts. If your unit buys in its horses, as will be the trend with more regular or professional units, then, basically, you're in for that standard distribution: mostly bay, with a few blacks and chestnuts. Why? Because your unit's/army's horse buyers are going to be pulling from a large available population of mounts, and in general that's going to be weighted towards what's statistically likely. The further back in history we go, as we discussed last time, the more bays you'll get. You'll still get greys, blacks etc, and society will and has placed a premium on these, so the more societally 'beautiful' and thus expensive horses will wind up underneath the officers.

The tricky thing here is finding data to back this up. We no longer live in a world, sadly, where the horse is a working animal, and people who keep and breed horses now do so for show and recreation. Coat colour has become a much more important concept than it was,  and people have become about as obsessive about it as we are about making sure our units have the correct collar facings, which dramatically skews some of the published stats in favour of the more esoteric shades (for example, the American Quarter Horse Association didn't allow horses with two CR genes till recently).

Having said that, I'm going to carry on sticking my neck out and say that if you take a large sample of working horses, then statistically well over half will be some shade of bay, and the further back in time you go, that's going to be even more the case. I'd also add, if you want to see examples of where horse colour is not a driving factor in selection? Go watch a horse race or a show jumping event...

But you will get a few outliers in your population: duns and roans in particular would seem to me to be the kind of coat colour that would pop up on an isolated horse or two in a big sample.

Anyway, to sum up, for these kinds of units the glib answer holds. "Mostly bay." But stick in one or two outliers for variety, and maybe mount the officers on pretty, expensive horses - greys or blacks, perhaps - if that feels right.

However, if we move on to, say, a barbarian tribe, things can potentially change, because our tribe is likely to be selecting from a much more limited and genetically interrelated set of mounts that it's bred itself, or tamed from a genetically restricted local population.

What does this mean? It varies, and you get, I think, to play with things in the absence of historical data. We could, for example, assume that for some reason our tribe's equine gene pool is low on A and/or E, and so there's a much higher percentage of chestnuts and/or blacks in the available mounts. Perhaps the gene for a flaxen mane on the chestnuts has got into the pool, too.

For another example, for my Numidian cavalry I painted recently I deliberately chose to assume their gene pool contained a few mounts with the Tobiano gene To, on top of a normal mix of bay, chestnut and black. Result, a mix of the usual horse colours plus skewbald and piebalds, but a fairly cohesive look to the unit.

Or you could assume a higher percentage of dun (like the Norwegian Fjord horse - thanks, Rika! - interestingly, this seems to have been selectively bred for the dun gene for over two millennia), or even grey, or the CR gene giving you a collection of palominos and creams. The world is, to an extent, your oyster here: the main point of these articles has been to help you understand how horse coat colour happens, and it should enable you to, as it were, have a play with a gene pool and paint a set of mounts for a unit of cavalry that makes some kind of sense.

And that's it for part 8. Next and hopefully last, unless I waffle on forever, a few notes on how I paint horses. As I've said many times, I don't claim to be brilliant, and I'm going to try and gloss over the details (if you use the three colour shadow/main/highlight approach, you'll have to do some of your own thinking, for example), but hopefully the results may prove useful.

Till then, have fun!