Colour Concepts 4: what colour is... soil? 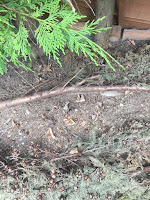 Every kid knows, soil is brown. Give a five year old a set of crayons, and the one he picks for mud, soil, earth will be brown.

Go do a Google image search for 'soil texture'. Now sure, some of those you would fairly call brown, but I'd lay odds that most of them aren't the shade of brown a kid would pick.

I don't know about you, but the soil in my garden at present looks like the image on the right here. It's not rained in the last couple of days, and if I pass Apple's colour picker over it, the colour turns out to range somewhere along this gradient:

The RGB values for both ends of that gradient are actually, as near as makes no nevermind, grey, very very slightly tinged towards red. I'm not suggesting all soils are that colour, of course - far from it. If it's been raining, our soil's much darker, for a start. And yes, soil can be brown, especially if it's got more clay in it: in fact it can even end up distinctly reddish.

In fact... there's a very nice tool the real soil experts use for soil colour. You probably have to be a complete soil nerd to care to the extent the Munsell Soil Colour scale cares, especially since the official chart book is about 200 bucks, but there are a few online versions that show you some of the (many) ranges of colour that soil can be. While I can get detail obsessed about things like horses and heraldry, I'm not entirely sure I can get sufficiently worked up about soil to buy a copy.

Where does that leave us? 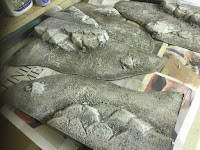 Fundamentally, not a lot better off :D There's a huge range of soil colours, and about the only thing we can say is that that hideous milk-chocolate brown GW supplied in their terrain set is nowhere near as common as your inner 5 year old (or someone at GW) thinks. As you've probably noticed, I've been using a series of dry brushes over a base coat to represent soil: the base colour is Sandtex Bitter Chocolate, which is a dark brown that dries a lot greyer than it looks when wet, and then successive layers of progressively lighter creamish/greyish browns to a final drybrush with good old 'magnolia' (basically pale cream).

To a degree, though, it really is 'your mileage may vary'. If I was doing NW Europe rather than sun-dried Iberian Peninsula, I'd use the same base coat but my final drybrush would be a bit less cream, more a light neutral (i.e. not bluish) grey. That said, if you look at the stuff I've done from a distance? it looks grey :D
Posted by Mike Whitaker at 17:47