Labels: basing, operation: squad, painting, Paras, Wehrmacht, WW2
As I've said before, I don't claim to be the world's best painter. But I'm quite proud of these for "wargame standard"...

Denison smocks are a sod to paint, too! 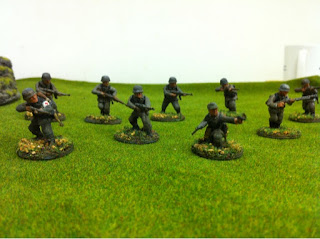 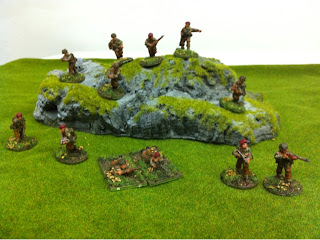 Paras (Warlord Games 28mm metal):
Dip was brushed Army Painter Strong Tone (after a false start in which I forgot to shake/stir the new tin!). Base is my usual - Tamiya Dark Earth textured diorama paint, dilute PVA to fix Javis Moorland Scatter, then a few Gale Force rock fragments. Finally, some Javis static grass - I find that this works remarkably well if you grab a pinch in your fingers and sprinkle it - it seems to stand up much like it was dropped from a puffer bottle and is much less mess (more Wife Points).

The final step is a spray of Army Painter matt varnish, and we're done.
Posted by Mike Whitaker at 22:22